The Story Of A VIVA! 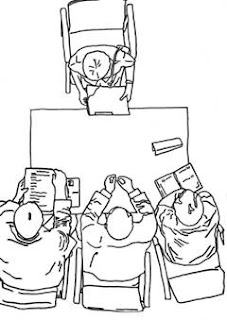 - ''Okay, so sir Alok, are you prepared ? What did you study ? “<Are you kidding me? Who the hell prepares for a viva exam. The only thing you need to know are the time and venue of the exam>
“Well not much sir, I just brushed up the basics.” <By ‘basics’ I meant a couple of topic names.>

- “So Alok, tell me what’s hfdhskfjh and how can we kdhfh hdhdj it ?''. <It must have meant something sensible to the examiner. But to me it was as good as German to UP's Bhaiyyaji. And honestly, my viva exam was over then and there. The real test after that was that of the examiner's patience>
''Um... Err... Ugh... It is... Err... But... Ummm.'' <That was my answer, convincing enough had I been my own examiner.>

- ''Ok.. Let’s try again. Tell me what is agstd ?'' <I pitied his gullibility. He thought a different question would bring out a sensible answer out of me. So cute.>
''Well sir, it is a circuit which uses the principle of agstd and it is used to design more complex agstd circuits.'' <I could hear Faraday laughing his a** out, Maxwell jumping in front of a train and my examiner calculating which fan would support his weight if he tried to hang himself to one.>

- ''No no no, those are ftnsht circuits you are talking about. Agstd circuits are a bit different. Anyway, let’s ask a simple one.'' He said, suppressing his temper.
In my head - ''Bring it on." I challenged him.

From his looks, it was evident that if he had an arms license then he would have been a mass murderer because, let’s face it, I am not the only of my kind, having a degree in pissing off viva examiners. His questions and my replies together made it look like it was a boxing bout. He was good but just couldn’t tackle my counter-punches.

As Dr. Lanning would say, "I'm sorry, my responses are limited. You must ask the right questions." Normally, a professor, after having enough of geniuses like me, excuses them and asks them to leave the room. My examiner defied that protocol. With tears in his eyes, he silently stood up and left the room himself. He was never seen again.

I triumphantly walked out of the room and answered the standard questions -
“Oye, viva kaisa gaya?” “Kya pucha bata jaldi?”

Now, this one was a moment to cherish. Every student turns into a celebrity after their viva-exams, with his colleagues wanting to know the what, how and why of everything that happened in that room.

“Arrey, it was great. I answered everything. All questions were pretty simple. Achcha, kal kaun sa hai?”